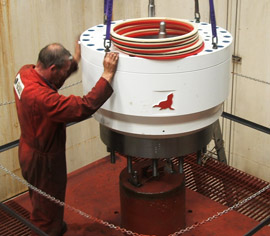 RedSeal was formed in 2009 by three individuals, Alan Reid and Alan Clark of Deep Blue Engineering Solutions Ltd. and Martin McKenzie of McKenzie Innovations LLP. Between them they bring over 60 years combined experience in various disciplines of the offshore oil and gas market. A technology gap was identified in the offshore drilling market with existing drilling riser system (telescopic joint) sealing technology having remained largely unchanged since its initial development in the early 1960's. Traditional systems provide no means of packer management, an operational situation viewed as outdated given the environmental and safety implications of a failure.

Drawing on previous experiences in successful drilling equipment product design and commissioning, the (patent pending) RedSeal Packer System has been progressed through a full product development programme culminating in the completion of the recommended type certification testing outlined in API 16F in late 2010.

In an industry traditionally resistant to change, gaining offshore exposure for new technology is crucial but through good working relationships within the drilling contractor market, a contract was agreed with Dolphin Drilling Ltd to supply the first RedSeal Packer System for the Byford Dolphin drilling rig currently contracted to BP in the North Sea.

In conjunction with the development of the RedSeal Packer System for traditional drilling systems, the product has expanded into the new technology markets of the drilling industry with the proposed implementation of the RedSeal technology in equipment for use in CAPM, MPD and dual gradient drilling.

The company has a manufacturing and supply chain allowing truly international market support and aims to grow its international client base and supply market ready products which will enhance offshore efficiency by improving current operational, health and safety practices whilst reducing impact to the environment.